Victorina Young from Somerset (known as Vic),
named after a Russian Aunt who was a cousin to Yul Brynner

Victorina started building ‘Choppers’ and custom painting in 1969.
Won the International Custom Car and Bike Show, Top Bike award in1973 at Crystal Palace with a customised 1958 Triumph TR6 with a write up in Motor Cycle Mechanics 1973 May edition.

Now has a customised 1957 Triumph Bonneville in the lounge! 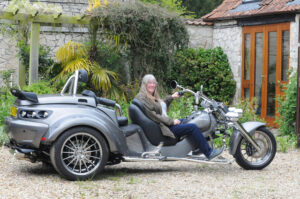 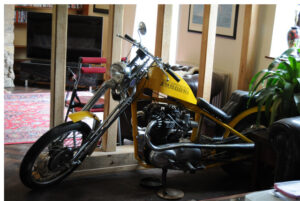 Thanks and acknowledgements to:-
William Lorton and Family, Jason Savage and Family, John Blyth, the Pilot of Spitfire 944, ShortsHD and DAvenport 3-2614 for their kind permission to allow us to put this out for public viewing.

When men were men!…

An 18 year-old just out of high school was trained to take pictures of damage done to German targets  by B-17’s. He flew in a British Spitfire fitted with extra fuel tanks where the guns were.

In other words, he flew over Germany unarmed…

WWII American Spitfire Pilot…
This is probably one of the best WWII film clips out there. Stored for 61 years in two suitcases of 16mm home movies that were inherited by filmmaker William Lorton from his great uncle who served as a Flight Surgeon. Those suitcases contained 3 hours of war footage that included a compelling crash landing of a Spitfire in 1944.

Filmed in a 2005 interview with the now 83 year old pilot and seeing the expression on his face when he realizes it is him in the cockpit, is something you won’t soon forget.
At 18 years old, he was all alone, behind enemy lines, with no guns, no escort and he gladly did it. They just don’t make them like that anymore. It was truly the greatest generation and we owe them so much.